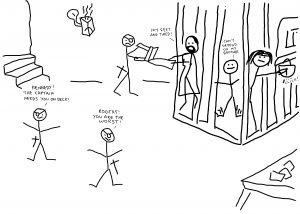 Although Nayte, Jasp, and Korbin were defeated by the pirate Cortez and locked in a cell below deck, Minis had eluded capture. He disguised himself as one of Cortez’s crew who had perished during the battle, and worked on a plan to free his friends. Meanwhile, the prisoners worked on their own plan, not sure they could depend on Minis to free them. Nayte distracted one of the guards by wrestling with him over control of a nearby chair, and Jasp snuffed out the nearby lanterns while he picked the lock to the cage.

A disguised Minis managed to improve the odds by convincing one of the guards he was needed elsewhere. With the gate unlocked and the guards distracted, Ajgus rushed into action, and the guards were overwhelmed quickly. Minis dropped his disguise, and the party retrieved their belongings from the captain’s quarters, climbed along the ropes back to their ship which was being towed, severed the ropes, and escaped.