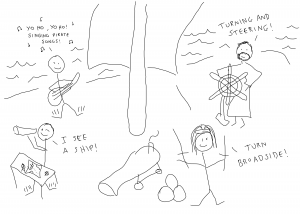 As the crew headed towards the island to seek our Cortez and retrieve the Planeshifter, Captain Skully assigned each of them jobs aboard his ship. Korbin navigated and instructed Nayte on which direction to steer. Minis kept the crew motivated with catchy songs, while Jasp performed the role of first mate, keeping the crew alert. However, on their way to the island, they were intercepted by Cortez’s personal battleship. Although they put up a good fight, the group was overwhelmed by the superior fire power and greater numbers of the enemy. Minis managed to avoid capture by remaining hidden, but the others were taken prisoner and locked below deck.