The party visited a tavern to find their contact, Shaky Jake. Minis took to the stage to tell (somewhat embellished) tales of the group’s heroics while the crowd looked on. Korbin cheered on his brother while letting everyone know he was there too. Nayte had his first ever taste of ale (and didn’t care for it). Shaky Jake ignited a bar room brawl when he attempted to cheat at cards while using Jasp as a distraction. As the fists flew every which way, Minis distracted the combatants with dazzling colors and song, and the group slipped away just as the guards arrived. 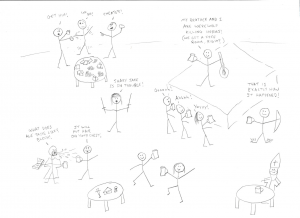