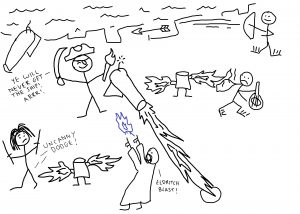 The party made their way to Cortez’s island, survived the treacherous jungle, and fought their way into the pirate base. As they made their way into the main chamber, they found themselves in the crosshairs of several cannons and face to face with Gunner SRG Ermey, who was waiting for them. Ermey unleashed a barrage of dangerous cannon shots towards the group and also deployed several walking flame thrower devices. The group was in serious danger of falling to Ermey’s weaponry, but prevailed in the end, landing the killing blow as several party members were on their last legs.

With Ermey out of the way, the base was now defenseless. The group lined their bags and pockets with piles of gems and jewelry from the treasure room. They rigged a room full of dynamite to explode once they were a safe distance away. Most importantly, they claimed what they came for – the Planeshifter, the boat that would allow them to enter the Plane of Water.

As the pirate base exploded behind them, the Planeshifter picked up speed as it raced across the sea. With a loud swooshing sound, everything went white.