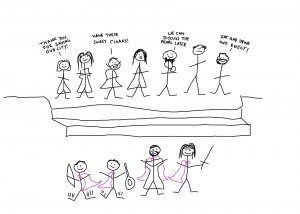 Upon arriving at the Ridgeoneon city of Sarath, the Quelteth introduced the group to the Council of Seven, the leaders of the city. They thanked the group for helping drive off the kraken that was threatening the safety of the city, and invited the group to attend a ceremony in their honor that evening. At the ceremony, the group was presented with magical cloaks made from the skin of a kraken tentacle that had been severed during the battle. One of the council members possessed the majestic pearl the crew had come for, and he assured them they could discuss their need for the pearl the following morning, once the celebration was over. Unfortunately, by morning, that council member had been murdered and the pearl was stolen. It was up to the group to solve the murder and locate the stolen pearl.